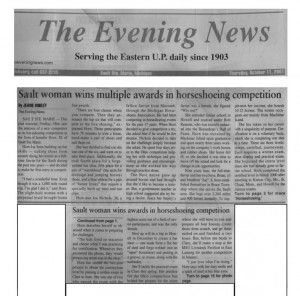 The Evening News
Serving the Eastern U.P. daily since 1903

This past weekend , Findlay, Ohio saw the entrance of a new competitor at it’s horseshoeing competiton in the form of Jennifer Horn, 30, of Sault Ste. Marie.

Horn had been building up her skills – making shoes from scratch during her tenure as a fulltime farrier for the Sault during the past nine years – and decided to make her first entry in competition.

“I had a wonderful time. Even though it was 1,000 mile round trip, I’m glad I did it,” said Horn. The slight-built woman with a perpetual braid brought home four awards.

“There are four classes where you compete. Then they will compete in the live shoeing,” explained Horn. Those participants have 70 minutes to trim a horse, hand-make a pair of shoes and nail them on.

She was thrilled to find out she was one of the six, and went on to take third place. Additionally, she took fourth place for a forge welded bar shoe, fifth place for a pair of “warmblood “ (the term for dressage and jumping horses) shoes, and a blue ribbon for a pair of “hunter fronts” that require a specially built-up heel and toe clips.

Horn met Joe Nichols, 30, a fellow farrier from Macomb through the Michigan Horseshoers Association. He had been competing in horseshoeing events for the past 17 years. When Horn decided to give competition a try, she asked him if he would be her mentor. Nichols decided to take on the challenge simply because she asked. He spent four days prior to the Ohio competition helping her with technique and providing guidance and encouragement as she worked her way through practice shoes.

The Novi native grew up around horses and though that she’d like to become a trainer. But, a government teacher in high school suggested she try becoming a farrier. Since her family’s farrier was female, she figured ‘Why not?”

She attended farrier school in Howell and studied under Bob Reaume, who was recently inducted into the Horseshoers’ hall of Fame. Horn was recruited by Mackinac Island upon graduation and spent nearly three years working on the company’s work horses and rubber shoes. Her horse fell ill, so she decided it was time to move off the island look for a change in job opportunities.

Nine years later, the full-time farrier and her two boys, Brian, 10 and Jonathon “Joe”, 8, have established themselves in Bruce Township where she serves the Sault area. She logs over 22,000 miles and 900 horses annually. To supplement her income, she boards 10 – 12 horse. The winter occupants are mainly from Mackinac Island.

She has taken on her career with singularity of purpose. Certification is on a voluntary basis, which she is completing one step at a time. There are three levels: intern, certified, journyman. Each requires a written exam, shoe display and practical exam. She bypassed the intern levels ince she had already gone to farrier school. Horn completed the certified level in Marchof 200 after traveling to Kansas City, MO., St. Cloud, Minn., and Howell for the various exams.

Horn describes herself as obsessed when it comes to preparing for challenges.

“The kids lived on macaroni and cheese when I was practicing for certification. Whenever they answered the phone, they would always say mom was in the shop.”

Horn has started the two-year process to obtain journeyman level by passing a written exam in Clare in June,. She was one of two who passed the exam with highest score out of a field of several participants, and was the only female.

Next up will be a trip to Howell in December to create a bar shoe – one maded from a flat bar of steel forged-welded (not an “open” horseshoe) and putting in a groove, or crease, along with the nail holes.

She’ll tackle the practical exam in Clare this spring. Her practice for the Ohio competition has helped her prepare for the exam where she will have to trim and prepare all four hooves, create shoes from scratch, and get them nailed on and finished in two hours. But, before she heads to Clare, she’ll make a stop at the MSU Livestock Pavilion in East lansing for another competition in January.

“I just love what I’m doing.” Horn says with her easy smile and a spark of steel in her blue eyes.