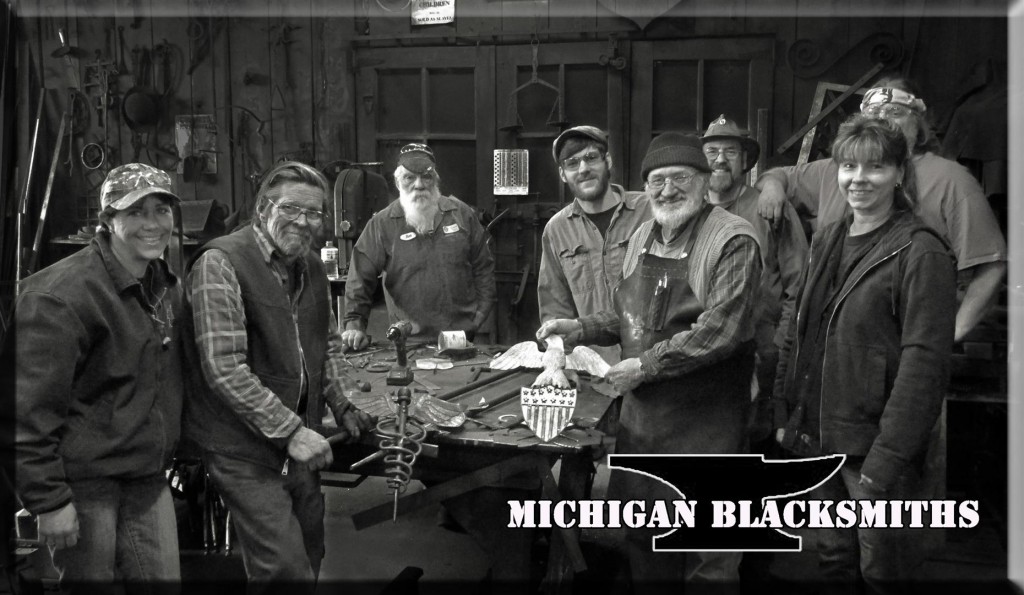 by Jennifer Horn, a MABA member

A puzzle hangs on the wall in the shop owned by Dan Nickels. A unique image created by using things that are not really what they appear. Dan’s entire shop is a collection of unique items, many that are not quite what they appear! Black Rock Forge is not only his workshop, it’s also his home. For the past 25 years at this current location outside Traverse City, Dan has been forging, and fabricating many beautiful works of art. I heard numerous stories about this man, and on a cold wintery February weekend, I experienced my own story to share.

The purpose of this particular weekend event was to build two cemetery grave markers. Dan had announced the project and dates at last September’s Southern Ohio Forge and Anvil Quad State Round-up, and also advertised it in our Michigan Artist Blacksmith Association newsletter. I eagerly signed up for the limited space event. Arriving on a Friday, later in the morning, I was very excited and a bit nervous. This venue would be a new situation to me. With a bucket of my favorite hand tools from home, I found my way in through the back door where I was greeted by Dan and his apprentice, Derrick Bliss, one of my favorite smiths. Dan immediately showed me around and made me familiar with where I would stay for the duration of the weekend. I had been invited to stay in his home, along with a couple other guests.

I wandered around Dan’s shop, looking at the interesting collection of tools and toys that he’s gathered over time. When everyone had arrived, Dan gathered us around the welding table to discuss our project. As an old photo of his family was passed around, he shared with us that he was a twin, and he talked about his parents. His father was a Navy medical doctor, and his mother a nurse with a passion for sewing. Dan had already drawn out his designs, for us to follow, on the surface of a thin white painted board. The marker design themes came from his parents careers yet were inspired by a book full of photos of very ‘airy’ southwest style grave markers.

After brief discussion, we were all encouraged to pick a design element and begin to fabricate the parts. I chose building the scrolls that would create the frame work of the marker for Dan’s Mom. Using Dan’s power hammer, I drew the tapers and wrapped them on the jigs already available in the shop. Even though I was pretty consumed with badgering Derrick with questions as he assisted me, I observed the rest of those in the shop busy with their work. I watched how Ron Loveland would cut pieces of flat metal with a jig saw, and then pass them on to Brenda Noppenberger who cleaned up the edges. Brenda worked on many of the small details, drilling holes for riveting and twisting wires for edging. Keith Nefe, a machinist, did anything that needed to be tapped or threaded. I also watched Keith use the power hammer to forge the ball that became the top of the Caduceus portion of the marker for Dan’s father. Sue Green was only able to be there for the first day, but she works in Dans’ shop regularly and was a valuable asset, teaching me how some of Dan’s tools operate. George Magsig cheerfully assisted me several times as a third hand, an extra set of eyes and with verbal input. Getting to forge with Brent Cole, the very first blacksmith I met from MABA more than a dozen years ago, was also a real treat.

I don’t remember how long we worked on the project. I suppose it was until the pizza delivery boy arrived. All the elements of the day’s forging made their way back to the welding table and the inventory was assessed. Under Dan’s guidance, a game plan for the next day was discussed. Still enjoying the camaraderie, I somehow found myself demonstrating the forging of a small flower to the others. Ironically, it was the same flower I give credit to Derrick Bliss for teaching me the method years ago. There were plenty of moments throughout the day where I had been learning tricks and tips from the others, as well as Dan, although they might not even had known it. The weekend had only just begun and I was having such a wonderful time.

Saturday all of us started where we had left off the day before. We finished the elements we had been forging and moved onto other elements. I decided to tackle the wings for the Caduceus. Using my wood handled farrier’s fuller, I chiseled the line details into the wings. Then, working hot with the assistance of Derrick, we set down each line, causing the details of the wings to visually “pop”. With the use of a swage block we added contour to the wings to make it look as if in flight. Successfully creating this element gave me confidence to tackle the eagle of the Navy seal. With significantly more detail to the eagle, I again chiseled the feathers into the wings and body. Derrick and Fred gave detail to the head. Once again, while hot, the wings were set down, and swaged.

Others were very busy as well. The tiny stars and stripes were riveted into the textured shield. The anchors were cut and wrapped with wire detail. Bits of a loom frame were fabricated for the top portion of the marker for Dan’s Mom. Everyone worked so well with each other, mixing and matching up as we all assisted one another. Dan oversaw it all, assisting and teaching us. What a delight! A highlight of the day, was striking for Derrick. Together, we split 1 inch bar to receive a 1 inch bar pass through which would create the frame of the marker for Dan’s Dad.

Many visitors came to the shop that day. It was obvious that they all respected and had interest in Dan and his projects. Dan’s twin, Mike and his wife brought food to the shop for our nourishment. We were well fed and again enjoyed a second evening of camaraderie. Saturday night, Dan had planned a special demonstration. He arranged a small table near the best drafted forge in his shop. Opening a can of casting sand, he described the process as he built a sand cast for a miniature anvil. Dan held the crucible close to the forge chimney as he melted brass with a torch, the smoke and fumes drafted away. He quickly poured the brass into the form. I anxiously waited to see Dan remove the casting. He made it look so easy. Dan generously let us all have a “go” at casting our own little brass anvils. I was so excited. I was really having great fun and wanted to keep doing it. Dan willingly fed my new addiction, and I poured another, and then another yet bigger one! I was having a blast!

Dan graciously shared his shop, his information, and his time. I took advantage of it. Late into the night, when the shop got quiet, I took advantage of the opportunity so I could to talk with Dan. I wanted to know more about Dan. I wanted to ask him questions. I wanted to learn about how Dan had made his life as a blacksmith. Dan shared his answers with me, including that he had for many years hosted a “Folly at the Forge” event. Those events consisted of many demonstrations and large numbers of attendees. It gave him joy to share so much about blacksmithing with so many interested folks. He told me that although he no longer has events of that size, part of his goal for this particular weekend, was to share with his apprentice, Derrick, a bit of what those events would have been like. It’s easy to see that Dan finds great joy sharing what he has, and investing in Derrick’s interest in blacksmithing. They are both very lucky to have each other.

Waking up Sunday morning, I felt quite ill. I wondered what had happen to me. Was it the two beers last night? Was I catching the flu bug my son had last week? Could it be something I ate? I was not good! I couldn’t forge. I couldn’t leave. I couldn’t do anything but be sick. I warmed up my vehicle, sat inside, and tried to not offend or inflict my illness on anyone else. I was not good! Those in the shop continued the projects. I wanted so much to be inside with them, but all I could do was sleep. Every so often I would wake, and there in my window, would be the face of Brent, or Ron, or one of the others, with a questioning look of “are you breathing?”. By noon, the sick metal taste had left my mouth, and I was able to at least be prone. My education continued. I learned about casting, fumes, the materials, zinc, protective wear, etc. All the safety concerns I may have overlooked in my casting excitement the night before cost me the Sunday morning forging, but luckily no worse.

By noon, I found myself comfortable on a stool in front of the wood stove. From that position I could watch as the team assembled the elements. Derrick had finished the form of the eagle we had been working on together. The 1 inch pass through pieces were positioned and the ends of the bars upset creating the frame of the marker for Dan’s Dad. His Mom’s marker was coming together with some riveting of the elements locking everything together. After adding a few hidden welds the markers were nearly finished. Dan was careful to protect everything with dry galvanizing before and during assembly of the pieces. So, while he and Brenda applied the protective finish on the entire project, I choose to head out.

Thank you Dan, for letting me be part of that! Interestingly, people see what they want to see, although there is so much more.

(Prepared for the Spring 2015 issue of The Upsetter)