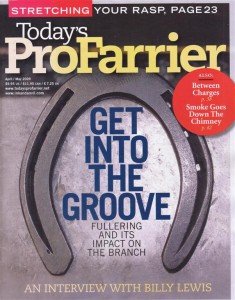 The text of Jennifer Horn’s article in the ProFarrier magazine is below;

I attended my first Michigan Horseshoers Association Annual Contest and Clinic as a spectator quite few years ago. Then, later, I began competing. I fell into it. I became addicted to competition.
I like to learn. I like to practice for competition. I like to be around other Farriers, especially those who like the same things I like. I like to compete. I like to win. I learned long ago when you devote yourself and work hard, you can win.

I did not compete in the contest this year. Instead, I devoted myself to the committee charged to plan and execute our event. A lot of work goes into hosting a horseshoeing event, especially a contest. For the Michigan Horseshoers Association this one was really special. Not only were we continuing the tradition of contests and clinics, we were also celebrating our 40 year Anniversary! This Anniversary was very special to us, in Michigan, because it’s the oldest contest in the country.

We extended our event from two days to three, allowing us additional time for some extra events. We hosted a top-notch Judge, Shayne Carter, CJF of Payson, Utah. We planned lectures. We planned the contest. We planned a special Anniversary party. We held an awards banquet and auction. Preparations began Wednesday afternoon, setting up the arena and allowing competitors to deliver equipment and practice if they wished. The Michigan State Livestock Pavilion isa beautiful heated arena. Filling fast, the competitors were organized by division at one end of the arena. The remainder of the space filled with vendors and sponsors and created a social area. In the center, bleachers faced a coke fire station available for our Judges, demonstrations and clinics. This station later served as the «Quick Draw Challenge” station. Here, anyone could enter the challenge of taking a square piece of stock and drawing it down to round, which then had to fit through a specifically sized hole in a metal plate. Several Farriers went back and forth taking the lead, as you could enter as many times as you like. In the end, Matt Lybeck with the quickest time of the weekend won the prize money pot and gorgeous bolt tongs forged and donated by Jim Quick.

Thursday our schedule began first with a Forging Clinic by Shayne Carter, followed by the forging competition. The Novice division was the largest with at least one competitor entering his first event. It’s an inspiring sight to see young Farriers and competitors eagerly stepping up to the challenge. Friday morning began with the two man draft class, an AFA warm-up with 7 teams participating. Roy Bloom & Matt Lybeck, both of Wisconsin worked hard enough to win this class. Good luck to them in Chattanooga! Then, it was time for some horses.

Shayne demonstrated his shoeing technique and then the live shoeing competition followed, where the top 6 qualifiers per division competed. The Robert Reaume Memorial Trophy for the best-shod foot went home to Kentucky, with Gage Morgan. Congratulations!

The last competition for the day was a little wild. The winner of the Eagle Eye class in each division competed in a ‘run-off) against each other. After choosing a partner, to whom they would have to communicate the shoe shape, they were given additional instructions. It was explained that there was an obstacle course around the arena and that they would have to run through it pushing a wheelbarrow filled with coke. They would have to do this between each heat of their shoe building. The father-son team) Doug and Travis Buck of Ontario claimed the Eagle Eye Championship.

The entertainment continued and included a constantly playing slide show. It showed photos of the current officers of the MHA, the great sponsors of our event, our original Charter Members, and member photos showing 40 years of Association history. A party with food, drinks, and of course cake was served among the vendor tables. We were honored to have some special guests at our festivities. The microphone was passed among several of them allowing an opportunity to share their experiences from the early days when the Association was forming. We should not take for granted what these men and the Charter Members organized. Bill Miller of Washington, Walt Taylor of New Mexico, and Gill Reaume from Michigan kept our attention with their stories. Wrapping up the evening we were entertained by a bluegrass band known as the Catfish Mafia. Their music even motivated some of the Farriers to ‘shuffle’ their boots in the dirt, completing our celebration.

Attendance at the event topped out on Saturday, and there was something for everyone throughout the day. To begin, Shayne Carter presented a power point presentation to a full crowd. He spoke of many aspects of Farrier work, but took a specific look at balance and theories. His slides were clear and informative, exposing the effects of balance or the lack of balance to the hoof capsule and coffin bone. As Shayne concluded his lecture, he generated thinking among the Farriers by distributing cadaver limbs to examine. We were instructed to make notes of the hoof shapes, distances, symmetry, and qualities. Then the limbs went off to three boil pots we had arranged in another area of the facility.

As the pots boiled and softened the limbs for dissection our final contest class began. A three-man draft live shoeing event inspired seven teams to enter. Each team would shoe a front and a hind foot with fullered shoes, and each competitor was responsible for a specimen shoe to be judged. The quality of the work was excellent, verifying the advantages of teamwork. The Ohio team of Mike Augenstein, Todd Adams, and Bob Ivory (Pennsylvania) claimed the blue ribbons.

Meanwhile, in the classroom, Dr. Roland Thaler and Doug Russo, CJF, presented their information regarding Farrier/veterinarian communication. Valuable information should be communicated properly. Documented case studies provided examples of the benefit of involving the veterinarian, the Farrier, the horse-owner and of course, the horse.

On the arena floor, another demonstration, by Henry Detweiler, CJF took place. Henry, using a shoeing stock, trimmed a draft horse. He explained the modifications of his own stock and addressed the safety involved for the Farrier as well as the horse while demonstrating the procedures.

A one-on-one forging station was available for anyone wishing to tryout some shoe building skills, work on modifications, or experiment with a different technique with experienced Farrier, Mitch Murphy, CJF. To ease stiff muscles, masseuse Moriah Newman operated a chair in a quiet corner.

After a couple of hours, the boiled legs were ready for disassembly. Shayne Carter surrounded by interested attendants’ removed hoof capsules revealing the coffin bones. After demonstrating where to cut tissues and pry apart the structures, he encouraged everyone to get their hands ‘dirty’. Remembering the prior mental notes taken about the limbs, the coffin bones were examined and correlations made. This was a very interesting follow up to the morning lecture and provided a rare hands-on investigative education.

The awards banquet and auction was the final assembly. The host hotel prepared a buffet meal that fed the 70+ in attendance. The 40th Anniversary slide show continued on a screen in the background, as Shayne Carter emotionally commented on the events and competition. A few words were spoken by the Contest & Clinic Chairman, Richard Becker, CJF, where he thanked the sponsors and contributors for their huge support. I then delivered the contest results, including the winner of the creative forging class, which was again a team effort, of Aaron Engler, Mike Beard, and Jeff Powers. The raffle ticket, held by Vern Powell gave him ownership of a new 100 pound Emerson Anvil. Mike Augenstein collected the Open High Point Award, Rusty Wells earned the Intermediate High point award, and Roger Howard claimed the Novice High point award. For the last event of the evening, Hank Detweiler, auctioneer, took the podium.

Every entry to the Creative forging class and a quantity of other donated items went to the auction block. Hank, with a bit of humor, kept the auction moving and the bids rising, An excellent job by Hank as well as everyone digging into their wallets helped this fundraiser. Georgia Organ purchased the top selling item, a beautiful Long Horn Cattle Skull, donated by Henry Detweiler.

After three days together, we sadly parted ways. Farriers and competitors came from Minnesota, Wisconsin, Illinois, Ohio, Pennsylvania, Kentucky, Tennessee, Virginia, New York, New Mexico, and Washington. We can’t forget our good neighbors of Ontario, Canada, who also joined with our Michigan Farriers. Feedback was awesome. New friendships were made and old friendships rekindled. Cultivating and exchanging ideas, promoting similar interests, and encouragement of the highest quality of workmanship surrounded us. These are the core purposes of the Association, as outlined by our Charter Members 40 years ago. Only half of our original founding members remain in this world, yet, I am certain all would be proud of this Association and what it has accomplished.

As I drove several hours home, my mind attempted to store all the information I had absorbed in that short time. I was tickled at how smoothly everything had come together. I looked for the reasons behind it, to ensure that we could reproduce a similar future outcome. I thought about the timing, the connections, and the investments. I thought about the committee, the contributors, the clinicians, and the competitors. I thought of the sponsors and the spectators. I began to realize, I had in a way been competing for a successful Anniversary event. With the other committee members I was in a team competition.

I had fallen into it. I was addicted to the Association’s success. I reached out to others for help. I researched information I would need. I planned ahead and I prepared. I received information handed down to me through generations. I listened and I learned. I joined a team who practiced and strived to reach a goal. There is no question of our success. There is no doubt why. When there is a team of this magnitude, a team of this size, a team of this caliber with 40 years of momentum behind them …. this team always WINS.